This page shows the environmental impact of the average primary school based on Envirometer graphs and key figures.

The pie chart shows the environmental impact distribution. Fuel & heat covers the biggest part of the chart, also electricity holds a big share in the enviromental impact of a primary school. This ratio is the other way around at relatively new schools. Because of the good isolation values their usage of warmth is lower while the presence of a mechanical ventailation system makes for a higher electricity usage. The water usage makes, with 3,1%, a way smaller impact on the environment than the 2 other themes. 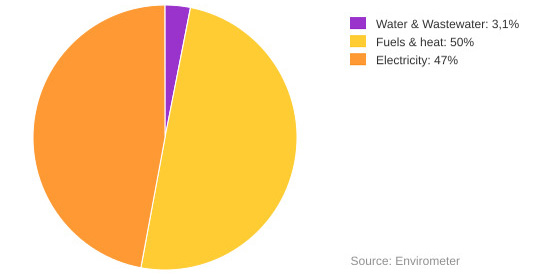 The most interesting statistics from the Envirometer for an average primary school can be found in the table below. After creating your own Envirometer, you can display the averages next to your own results for an easy comparison.

Comparing your score to the average

Complete your own Envirometer to compare your graphs and figures to the average.

Stimular assisted alot of schools with their envirometer. Based on 26 primary schools in three different municipalities Stimular has specified the average environmental impact for primary schools. The sources are diverse and based upon numbers of small and large schools (likewise in students as in square meters) and covers a huge variety in construction years (1910-2012).